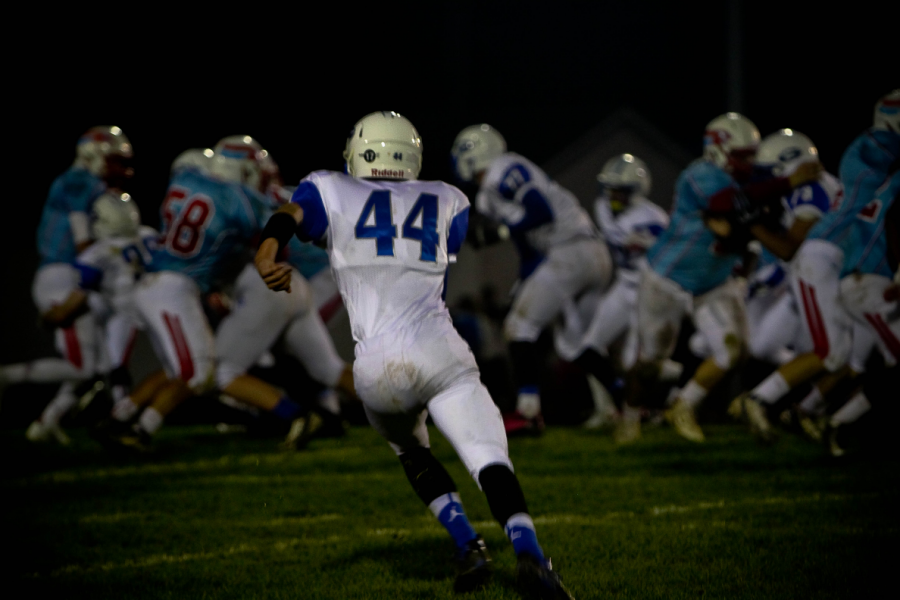 As September comes to an end, varsity football started their regular conference play away at Centennial High School against the Eagles.  The Gophers started strong with a very good first half, then lost the lead in the second half and finished the game losing 21-14.

The game was expected to be a difficult one with unknown outcomes. Todd Nagel, varsity head coach and athletic director, stated that he has seen Centennial’s players and coaches and anticipated that the game would be difficult.

“I know it’s going to be hard.  We know these guys well,” Nagel said. “It will probably come down to turnovers.”

It was supposed to be a rainy night and playing on grass was expected to add to the difficulty of the game.

Gophers were going strong, up 14-0, however the Eagles scored right before the half making it 14-7 and changing the momentum of the game.  Defense continued to stay strong through the whole game, but the Eagles defense picked up in the second half and scored two more touchdowns.  Gopher offense played well but could not manage to score again in the second half.

After a tough fight, Gophers ended up losing to the Eagles 21-14.

Senior quarterback Devon Shields says that he is not sure what happened between halftime and the end of the game.

“I think they took some momentum away when they scored at the end of the half,” Shields said.

Senior Gre’gonta Brown said it is what it is, and they cannot change the score. He added that the overall the game was played pretty well, though much of the team feels the outcome of this game could have been very different if they could have put some important parts of the game together.

“Defensively we played great and did what we were supposed to do,” Brown said. “Offensively our line needs to get a push. We need to be able to air it out against teams.”

Shields also said that the defense played well and that the offense could not get going in the second half.

“I know there are a handful of throws that I wish I could have back, but besides that, the game plan worked, we just need to execute better,” Shields said.

It was the season opener, and now there are things the team knows they can work on. Brown noted some specifics that they will work on for the next game.

“Ball security. Marching down the field. A lot of pieces have to be put together,” Brown said.

Although the players unable to play are important, the team’s motto is “Next man up”, and they are ready for someone to step in and play if needed. Nagel agrees that the next person in that position to play has to step up.

“Do your job. You don’t have to do anything superhuman, just do your job,” Nagel said.

Being that it is still very early in  conference play, there is always room for the team to get better through the season.

“We’ve gotten better from the first week to now, and I think we will continue to,” Shields said. “It’s all about how we respond this week in practice and if guys step up.”