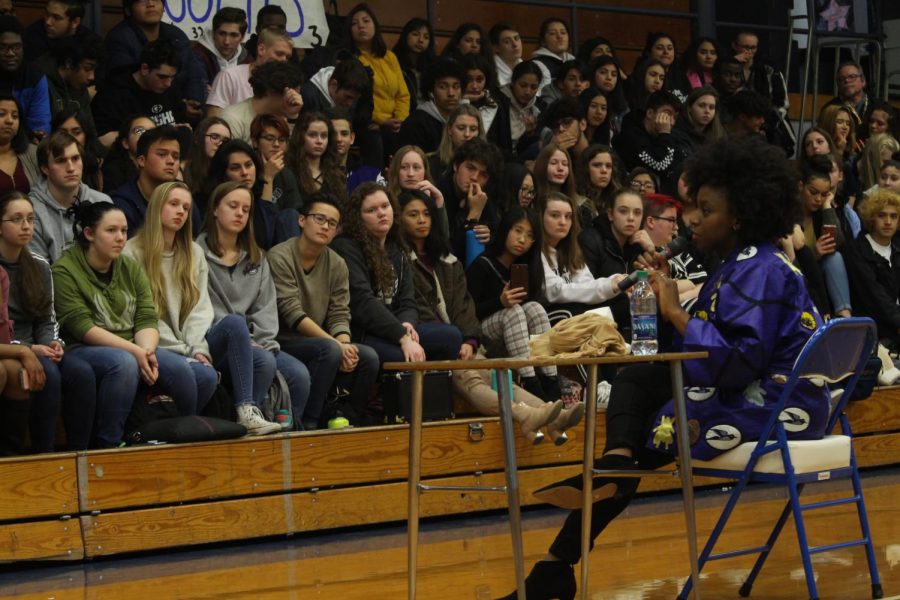 Adichie speaking to the students at assembly on March 14th.

On March 14th, author and international speaker Chimamanda Ngozi Adichie visited our school and Jefferson high. Adichie came to do a Q&A for juniors that read her 2014 argumentative book We should all be feminists, based on her 2012 TEDx talk. Both We should all be feminists and her novel Americanah were chosen as the 2019 Everybody Reads book for the Multnomah County Public Library.

The Everybody Reads program is an annual event hosted by Multnomah County Public Library, with author appearances made possible by Literary Arts.The goal of Everybody Reads is to bring a community together by creating a common discussion about a book.  Some previous books that were chosen as a part of the Everybody Reads program were Exit West by Mohsin Hamid in 2018, Evicted by Matthew Desmond in 2017, and The Book of Unknown Americans by Cristina Henriquez in 2016.

Adichie was born in Enugu, Nigeria the 5th of 6 children, in a house formerly owned by famous African author Chinua Achebe. She has written 7 books including Purple Hibiscus, Half of a Yellow Sun, and That Thing Around your Neck. Many of Adichie’s works focus on feminism.  She moved to America at 19 and studied communication at Drexel University in Philadelphia. Many questions asked during the Q&A were focused on the topic of feminism and her answers were informative and entertaining for all who attended.

“Her answers personally were very insightful, she doesn’t speak from a single perspective, she gets multiple perspectives involved,” sophomore Taylor Ramirez said after attending the Q&A.

Adichie radiates confidence. Coming to the Q&A wearing a stylish purple smock covered in different patches, along with her naturally curly hair, she seemed very sure of herself.  She was very involved in the questions students were asking about her book or other topics and her informative answers drew attention from the crowd.

“They tell kids all the time (to) think before you speak, she really thinks about all the words that she says and how she answers questions,” Ramirez said.

Adichie was originally scheduled to come in at the end of 5th period but because she didn’t feel well, she did not arrive until the middle of 6th period.   Although her time was cut short, she was still able to make the most of it by encouraging student voice and answering in an authentic way.

“She was treating the kids like adults and that is always what I want to see, the level of respect was astronomical,” English teacher Crystal Ginger said.

Adichie’s writing is very popular in various places around the world and is often part of the school curriculum for AP or IB English classes. This year, junior IB English students at Gresham were assigned to read We Should Alll be Feminists to study her use of argumentation in her book.

“The book is so convincing (about feminism) that when I read it, it seems obvious, and I think that’s beautiful,” Ginger said.

During sophomore and junior year English focuses on persuasive writing, Ginger explained. Students will have to write a persuasive article similar to Adichie’s work on their own after her reading her book.

“Her example is wonderful, and so we’re using that as a springboard for all my students to write ‘We should all be…’ filling in the blank,” Ginger said.

Those reading the book will be very informed about the ongoing argument of feminism.

“It makes you think about things differently,”junior Heaven Bambino said. “(Her) personal experiences helped me relate to things more.”

Adichie’s book gives a pro-feminist stance on the topic, providing both personal and experiences and facts to make for an educational read.

“I think that it’s a good book to read and educate yourself on because it never hurts to listen to somebody else from another perspective,” Ramirez said.  “I liked how it was simple, but it was straight to the point and she uses stories to help gain an understanding (and it can)further your opinion on feminism.”

Adichie’s book has a very straightforward writing style. She includes her opinion,  but because she also includes personal stories, her book feels authentic and not pushy. Feminism is an important topic today as the “Me Too” movement, which focuses on women feeling empowered to discuss sexual misconduct and abuse, has taken over social media. The movement has led to more support and encouragement for silenced sexual abuse victims to give voice to their experiences.

“[Adichie’s book] provides a side of an argument that is often drowned out on YouTube. I often see many, many videos of the negative side (of feminism). And so I think it’s important for students to see the positive side.” Ginger said.

Adichie defines feminism on her own terms.  She wrote, “My own definition is a feminist is a man or a woman who says, yes, there’s a problem with gender as it is today and we must fix it, we must do better. All of us, women and men, must do better.” Many feminists are trying to create a more open, feminist culture, where all genders support the empowerment of women, but many advocates still feel there is more to be done and Adichie, as a renowned author,  is at the forefront of this movement.

“Her [Adichie] teach[es] that anyone can be a feminist and anyone should be. (I) just feel like feminism is a battle,” Bambino said.