Drugs on Campus Becoming an Issue 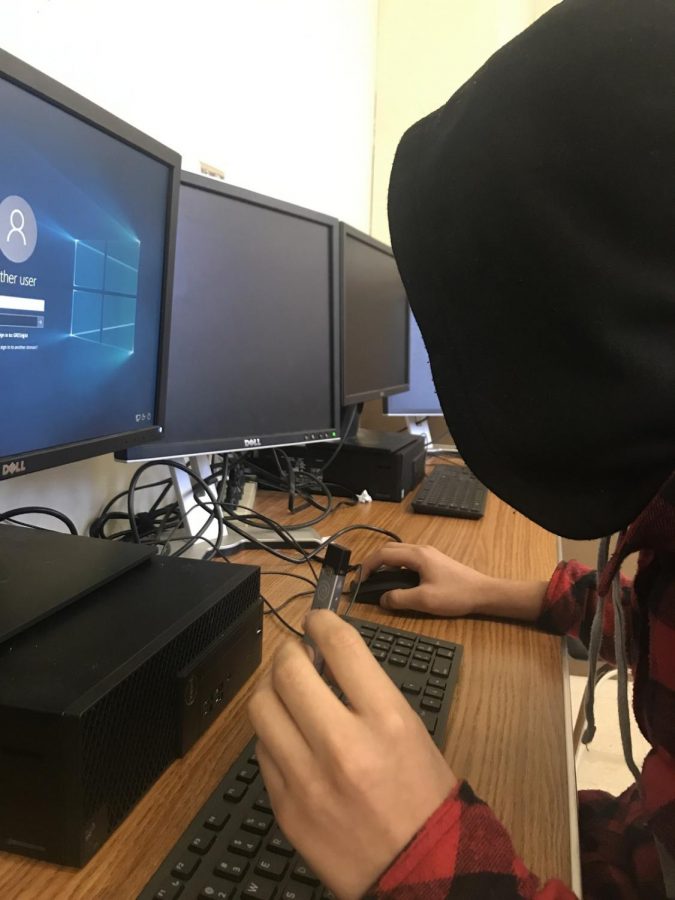 A Gresham student using a juul in class.

Walk into any bathroom on campus and you can learn about the popular drugs teens are using today. Vapor residue from oil pens and vape pens (full of nicotine) can often be seen when visiting the restroom.  Drug usage among teens is nothing new. Drugs have been the choice of teenage rebellion since they were first introduced. With the recent popularity of oil pens and vaping, drugs that were more popular in earlier decades are now on the rise again. Marijuana and nicotine usage is now more popular than other “party” drugs.

“I don’t really want to get into any hard drugs, I don’t want to do something that could seriously affect me, so weed and nicotine is all I use,” said Bryan a junior at Gresham High School.

Bryan, and many other students that think the same way, may not be right about marijuana according to Jesse Schram, a Clinical Social Worker and expert on addiction at Boston Children’s Hospital.

“Our research says if you’re smoking marijuana heavily over a long course of time your IQ can actually drop,”  Schram said. “Marijuana and other substances can lead to other developmental problems like slowed motor control, motivation, and even loss of short term memory.”

Despite the research Schram says that students nationwide don’t see marijuana drug use as a problem.

“It’s kind of like this socially learned thing as well, if you’re around it at home or with friends, it becomes normal,” said Schram.

It is not uncommon to see students use substances such as oil pens containing marijuana, vapes, and other prohibited substances during school hours and many staff members don’t fully know how big this problem actually is.

“In the bathrooms, I’ve only seen other students using oil pens and mainly juuls,” an anonymous sophomore said.

Students have tended to just turn a blind eye to other students using these banned substances because they have been  “normalized”. But why do students like to use these substances in the first place? “I think it’s that kids love the cultural cachet of being “cool” and getting high is seen as “cool” and rebellious and edgy, as well as feeling good,” English teacher Ms. Ginger said. “I do think some kids might use because of emotional situations that they are otherwise unable to escape.”

Wanting to fit in at high school is a very common thing for high schoolers, but there are also some students that use due to mental disorders such as depression or anxiety and even to cope with abuse, and issues at home. Substances can act as an escape for these young adults.

“We’ve seen people that have had trauma and abuse that went to substance use because of it,” Schram said.

Students often use these drugs at school, maybe to escape problems on campus.

“For obvious reasons the bathrooms [are where students use banned substances] if they are on campus, but if they will go off campus, its during lunch, late starts and early dismissals,” Mr. Shields, GHS security officer said.

Many staff members are aware that drug use is a problem at Gresham but don’t actually know how big this problem is. Estimates vary on the percentage of the student body who use drugs.

It would be very hard to get an accurate number and percentage of the students who use because many students would not be honest if asked.

According to Shields, on average a student gets in trouble every 12 days for intoxication or drugs.

If someone does get into trouble for intoxication or drugs the student is suspended and then issued a school order drug test, the student must then have a meeting with the assistant principal to get re-established at school.

Drugs have become normal for students at Gresham to see, even though all may not be comfortable with them. Students may not think it will have an effect on them but studies say otherwise. Drug usage, even casually like many cases seen at GHS, can cause long term effects that can have negative consequences far beyond high school.