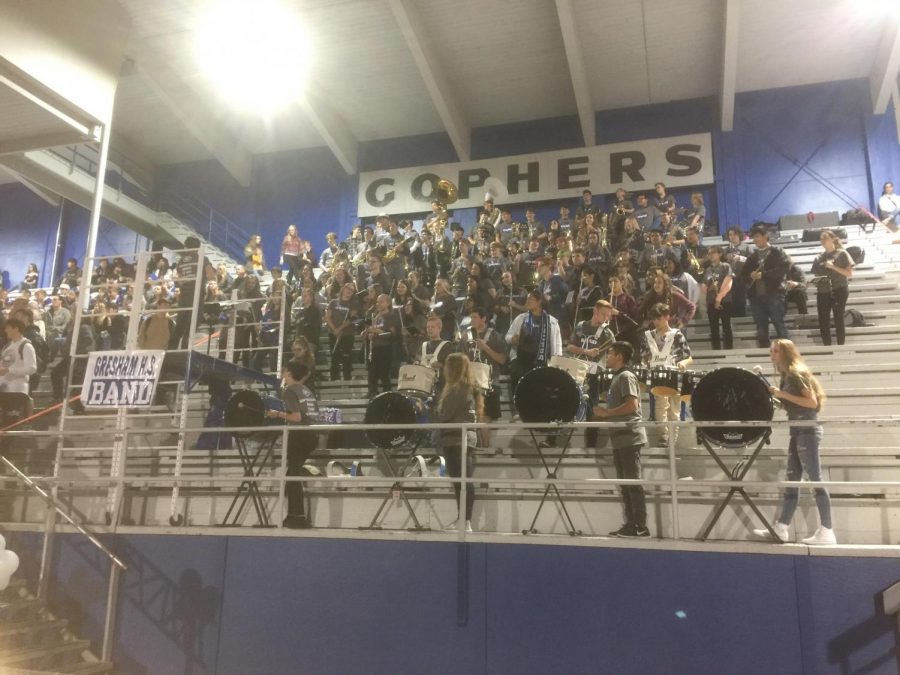 Located near the upper gym in the old mat room, the band puts in long, hard hours of practice. The band plays at the basketball games, football games, their own performances, and regional/statewide competitions.  You probably see or hear the band the most at sports games, because not many students outside of the band seem to have an interest in band concerts.

Each of the bands, which here at Gresham includes the 9th-grade band, the wind symphony, and the wind ensemble, and the jazz underground, are getting smaller with fewer students joining the band in their middle school years or quitting in 9th grade. Currently, there are about 40 to 50 students in each level of band.  Even with this amount, this still leaves the band a little short-handed when it comes to making a statement when they play, especially at the football games where it is important to be loud because the field is so large.

Nicholas Budge, the band’s director, has a very specific style of directing and leadership.  He focuses on driving the students to compete at a higher level, and sometimes his direct style can be intimidating.  However, he has led the band to win many awards and competitions, so his style is obviously working to create an amazing band program here at GHS that deserves more recognition.Mr. Budge also deserves more recognition for getting the band to the level they are currently competing at.

“He inspires us to make music around the notes, and not just on the notes,” senior Tiffany Jones said.

Even though Mr. Budge inspires dedication and fierce competition, the performing arts programs always get less recognition from the school than other programs like athletics.

High schools all around the country often focus more on sports and athletics than their visual and performing arts programs, but often the arts perform at a higher level or win more at the competitive level than sports.

“This school does far better in some of the arts than in athletics,” Jones said.

Also even though all three bands play as a whole at the games nobody seems to recognize or appreciate the band, except for parents or band members.

Budge is an influential and caring band director and tries his best to make sure every student is at their top potential and always improving. He influences the members of the band to recognize various types of music and know what styles to play when the band encounters different types of music.

“I don’t think that very many people understand the dedication, hard work, and sacrifice that being a band member requires,” Budge said.

Performing arts brings students together with the one single goal of performing a piece of music or a play and takes many hours to perfect.

“The band members participate in many ‘outside of the school day’ events for the band program itself, but they also sacrifice hours and hours for other groups in the school and community.” Budge said.

The band program at our should get as much, or more recognition as athletics, or other art programs. Earlier this year at the Northwest Invitational Concert Band Contest, The Gresham Wind Ensemble was selected as the top sight-reading band throughout the entire day of competition out of 15 other bands. Two members of the Gresham High School Wind Ensemble have been selected to perform in the All-Northwest Symphony: Ian McMurray who plays french horn and Samuel Zhou who plays bass clarinet.

On December 8th, 2018, the Gopher Jazz Underground, performed at the Mount Hood Conference Champions and the band placed 3rd and all three soloists received All-League honors.

This being said, I also believe that the other performing arts deserve more recognition from the school and hopefully in the near future these programs will be able to hold the level of recognition that the athletics receive.