Going Out With A Snap! 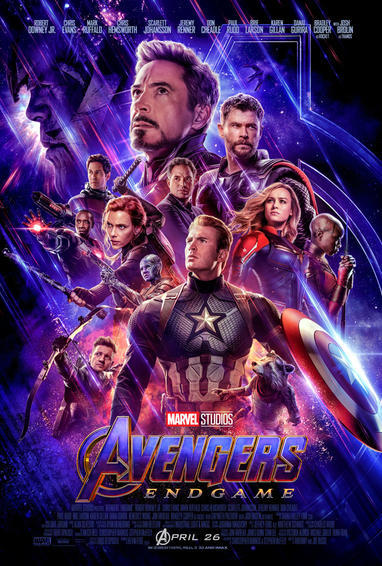 The poster for Avengers: Endgame.

Spoiler alert! Please do not proceed if you do not wish for the plot of Avengers: Endgame to be revealed.

“Avengers: Endgame” was released on April 26, 2019.  It was a groundbreaking film that grossed $2.189 billion in total. The film is the sequel to “Avengers: Infinity War”, taking place 5 years after The Snap.

The film opens on Clint Barton with his family teaching his daughter to shoot a bow and arrow while his boys play catch. His wife calls for everyone to attend dinner, we see his daughter walk off and Clint doesn’t pay attention. When his daughter takes too long he looks for her only to see she was gone. He turns and calls for his wife but she is gone, as well as his entire family.

We then get a look at Tony Stark in space trapped with Nebula on the Milano. The movie proceeds to show the Avengers reforming then going back in time to grab the Infinity Stones to save everyone.

My favorite moment of the movie was the reuniting of almost all the Avengers during the last battle scene. Another memorable moment was when Captain America held Thor’s hammer Mjolnir.

Fans knew that Steve Rogers would be worthy to wield Mjolnir after we saw the Avengers party during “Age Of Ultron”. The scene in “Age of Ultron” shows the Avengers and members of S.H.I.E.L.D hanging out. They start to take turns trying to lift Mjolnir and Captain America manages to move it slightly. In “Endgame” after Captain America lifts Mjolnir he begins to battle Thanos. During the battle, Thanos does something that shocks audiences: he breaks Captain America’s Vibranium-Adamantium alloy shield. This shocked fans since only one other person in the MCU has been able to damage his shield.

I was amazed at the humor in the movie. An example of this is when Thor laughed and screamed “I knew it!” when Captain America lifted Mjolnir.

I also liked how you can pick out the links to all of the other Marvel movies. I thought it was great that Marvel had the scene where the Avengers went back in time and Tony got to talk with his father Howard Stark for the last time, Stark’s father and mother both died in a car accident caused by the winter soldier. It was a real tear-jerking scene to see Tony so happy that he is standing face to face with his dad.

Overall I believe that Marvel did a fantastic job at entertaining the entire audience. Fellow Marvel lover JaCario Thompson said, “The comedy, action, and suspense was great and compared to other Marvel movies this was the best.”

I personally thought this was also the best Marvel movie and I rate it 10/10.