Fortnite was released in 2017 and since then has managed to gain 250 million players. The game’s popularity has increased due to frequent additions to keep players engaged. The team aspect of Fortnite seems to be pivotal to its popularity because being able to play with friends and other players keeps it interesting and immersive for many students.

Fortnite is competitive and requires a lot of practice in regards to gaining the skills necessary to win a match. These skills are: being able to communicate with others through headsets, intense concentration, and coordination. In the game of Fortnite, you need to be able to communicate with your teammates to defeat opponents and share resources.

Concentration and coordination are also pivotal because it allows the player to keep their health, switch weapons when needed, and build barriers for protection. All of these elements have created an engaging and addictive game for many.

“To become a Fortnite pro you need to stay calm in important situations. I play up to five hours a day to keep improving,” senior Syrus Sagiao said. 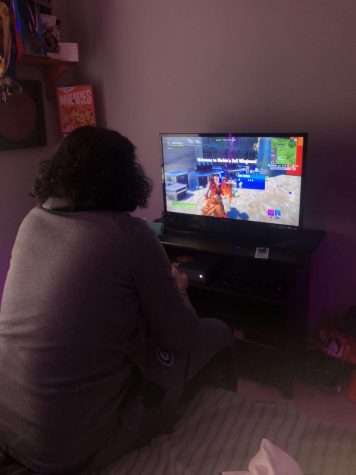 A new chapter of Fortnite was released on Oct. 15, 2019. This was highly anticipated and had many new additions such as a new map, water-based fun, upgradable weapons, new graphic design, and many more immersive elements.

“All the new expansion packs have made the game much more difficult, however adapting was quite easy,” Sagiao said.

Clearly, at this moment Fortnite is at its peak and is already planning another release date for season two of the newest chapter.  After its latest release, Fortnite saw a 141% increase in sales in just one week on iOS alone. A day after its release date they generated 1.1 million dollars, according to finance.yahoo.com.

People seem to have mixed feelings on the new chapter because its drastically different than what players are used to. Players got used to seeing the same popular areas on the old map, such as Tilted Towers, and were disappointed that these were no longer a part of the new chapter.

“My feelings on the new chapter are very mixed, I feel it’s good for the game to refresh and make a new part [chapter], but I personally don’t like the new map because it’s much bigger and more spaced out. I believe the new attributions will get better to begin with then become pointless and not feel new for anyone,” senior Dylan Hackmann said.

Fortnite plans on producing more seasons and possibly more chapters, but the overall excitement for most players is becoming less significant because there are only so many contributions that can be added to Fortnite until it could become redundant.