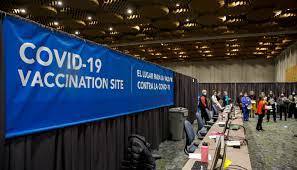 The Oregon Convention Center has been turned into a vaccination center and has reached up to 15,000 vaccinations per day.

When the pandemic started, scientists started working on a vaccine. Over a year later, more than half of Oregonians are at least partially vaccinated. There are three big vaccines currently offered in the United States: Pfizer, Moderna and Johnson & Johnson/Janssen, along with the less common AstraZeneca.

According to the CDC, the Moderna and Pfizer vaccines are pretty similar side effects and dosage wise but the Johnson and Johnson is different. According to the ASTHO (association of state and territorial health officials} website, the Pfizer and Moderna vaccines are similar. Both are two doses spread multiple weeks apart and have side effects such as pain in the arm, redness and swelling in the arm at the injection point, tiredness, headaches, muscle pain, chills, fever and nausea one or two days after the shot.

“I did experience a minor headache from the Pfizer vaccine but after that it’s been clear skies,” senior Angela Manley said.

The Johnson and Johnson vaccine has roughly the same side effects but according to CDC it has been “paused” by health officials due to blood clots in recipients. Although there have only been 6 cases of blood clots out of 6.8 million as of April 12th. All 6 cases came from women 18 to 48, symptoms occurred 6 to 13 days after vaccination. The type of blood clot is called cerebral venous sinus thrombosis (CVST) and is seen in combination with low levels of blood platelets (thrombocytopenia).

According to npr.org, one of the six women who got it one is in critical condition and the other was fatal.

The fatal case was a 45 year old woman from Virginia who got the Johnson & Johnson vaccine in March and two weeks later died. On April 23rd, the Johnson & Johnson vaccine was re-released by decision of the CDC and FDA. Both the CDC and FDA are confident in its ability to safely and effectively prevent COVID-19. They also said that safety is their top concern and the benefits outweigh risks.

There have been many vaccination sites set up across the country. Popular ones in the Portland area are the airport parking lot and the Oregon Convention Center.

“I was able to schedule through the Oregon Health Authority website and it was a very simple and straightforward process. My appointments were at the Oregon Convention Center,”social studies teacher Grace Junkins said.

According to Oregon.gov, the process for getting the vaccine is to find an appointment at the convention center, the PDX airport, Hillsboro stadium, the Jackson county vaccination equity center or to make an appointment at a pharmacy. Then, follow the link and schedule an appointment. Appointments can take time to schedule online.

“(There was) a lot of trial and error. Signing up for anywhere I could, and a lot of phone calls,”senior Olivia Merg said.

According to an article by Forbes titled “Covid-19 Herd Immunity Looks Like A Mirage, But Is Worth Pursuing” herd immunity for COVID-19 would be 70%-90% of people worldwide. The same Article also reported that 30% of Americans have expressed an unwillingness to get the vaccine.

According to an article by The New York Times on May 3rd titled “Reaching ‘Herd Immunity’ Is Unlikely in the U.S., Experts Now Believe” says that herd immunity may not be attainable or ever, saying that COVID-19 may be circulating in the United States for years to come.

President Biden says that the goal for vaccination is to have 70% of adults vaccinated by July 4th and to have 160 million adults fully vaccinated with the hope that those numbers will cause a turning point in the fight against COVID-19.