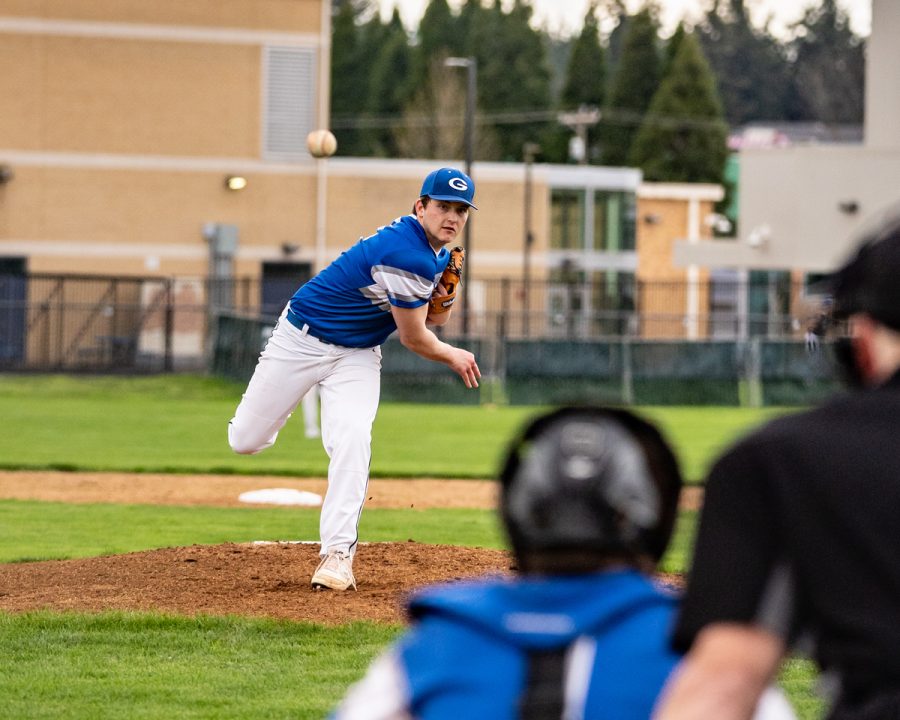 Like spotlight to a performer, sand crunches under a batter’s cleats as he walks onto the field to bat at home plate.  Once on the diamond, he feels rows of eager eyes watch his jersey, as crowds shout his name and number, hoping for him to hit one home. Yet hundreds of shouts are suddenly silenced when the pitcher ahead of him prepares to throw, and for the batter, it’s as if time has slowed down. Outside voices distort as his heartbeat roars in his chest. All eyes are on him now; and hearing only his own breath, this was his moment of truth. So like thunder in a storm, the crowd hears a loud CRACK! As the bat collides with the baseball violently; sending it far past any outfielder. Homerun!

With the close of basketball, swimming & wrestling seasons, spring sports have opened up: tennis, golf, track & field, softball, and last but not least, baseball.

However, while other sports are rebuilding, it’s only reasonable that this year’s 2022 GHS Baseball team has an unusually high playoff-bound ceiling this season. Sporting several senior captains as well as emerging sophomores, the roster is loaded with talent, and with enough discipline, stardom.

“We got some seniors that are gonna lead the way for us and we have Drew Trichia, Zach Kaufman, Bobby Peacock, Carlton Frost, Tyler Jorgensen, I mean they’re good kids and if they’re doing well and what’s expected of them I think we’re gonna have a lot of success. We also have key players that are younger, we got three sophomores that played in varsity last year, and have been contributors for us, and a couple of juniors like Owen Cummings had a great year last year, so we try to keep things loose so that guys perform at a higher level, so I think it’s gonna be a great season, I have high expectations for we’re gonna do!” Head Coach Matt Smallwood said.

With the team’s many senior veterans and high-performing underclassmen, it should come as no surprise that for many baseball isn’t just a recreational sport: it’s a way of life.

“I’ve been playing baseball since I was 5, it was the only sport my mom would let me play because I was a short kid, I was scrawny, nothing I could really do, it was the safest sport my mom could let me play, but luckily it was a sport I fell in love with and over the years there’s been highs and lows with my teams, but it’s always been a sport that I loved and hopefully I get to play a lot more in the future,” senior center Drew Trichia said.

It can be difficult to lead a team to a winning record without proper coaching, as experience and knowledge are key.  Luckily the baseball team has this in head coach Matt Smallwood.

“I’ve been coaching baseball since 2000 starting small, but I was recently hired in 2016 to coach with Ryan Miller: the head coach at the time, I coached with him for three years before he resigned and then I applied for the job when it became open and I got the job,” Smallwood said.

Although the Gophers are in a great spot with high morale, experienced coaches, and solid expectations, things weren’t always so, as a team culture takes time to change and build.

“I think the biggest difference is being able to create the culture that you want to see and how you want things to be done. I think before as an assistant there was a lot of toxicity and negative stuff in the program, and so I think that being able to drive that and create what I wanted: like good character, for example, are some things that I put as a priority,” Smallwood said.

Smallwood has made joy a point of emphasis for team culture, pointing out that without fun, the passion for sports is lost, and then it becomes a job.

“One of the things I think happens a lot, in baseball programs is it’s more of a job where we’re putting more emphasis on performance, and so much so that it becomes very stressful for a lot of young players. So I think shifting that was a big part and that making sure the kids are having fun every day. It’s a lot easier to buy into a culture that works hard when it’s fun,” Smallwood said.

Consequently, with Smallwood’s coaching philosophy of balanced fun & discipline, the players are still able to enjoy themselves whilst still progressing.

“The main thing is just having fun, cause if you’re not having fun then you’re not really playing the sport, so in baseball, nothing’s more exciting than getting a hit over the fence and walking around the bases as the other team’s defense looks at ya, nothing’s better than a homerun!”, Trichia said.

Unsurprisingly, after playing for some time, players like Trichia have also found much developmental success under the current coaching style.

“When I originally played freshman year, I was a second baseman, but over time I started going to outfield and that’s when I really started to see how good of a player I could really be, I mean I’m not gonna lie, in my first couple of months of baseball in freshman year, I had a hard time throwing from second to first, it was just inconsistent, but then they moved me out to outfield and I just kept getting better after that,” Trichia said.

New members of the team have also had positive experiences.

“The team seems great, they’re nice people who love to talk while practicing, it’s a good experience when you get to pay attention and get to laugh with your teammates after instructions are already given, and when you’re practicing,”junior varsity player Cody Henry said.

As with team culture, it’s also important for a team to have clear expectations for what a good practice might entail.

“Today we did a three lap run around the fields; baseball, big house, and softball, then we stretched and did our throwing to warm up our arms, and then split into two groups: an infield and outfield group. The difference is that the infielders do a lot of grounders and have pass to each other from each of the bases, like passing from third base to first base etc. Then once softball’s done inside the training room, we head inside and set up a soft pitch and T, and have weighted balls in one corner for arm strength and the other we do underhand tosses, then we huddle, the coaches talk to us, then we break and usually end around 5:15 to 5:30,” Henry said.

With lots of training, morale, and passion, this year’s baseball team is out on a mission, particularly against our sister school Sam Barlow, the infamous rivalry of the Gresham-Barlow School District.

“Barlow’s our rival, they beat us last year, but it’s bout time for us to beat them, and we’ll make it happen! And for the viewers out there, I know baseball is kinda the outlook of a boring sport, but if you just take your time and watch it and understand it, you’ll really enjoy it.” Trichia said.