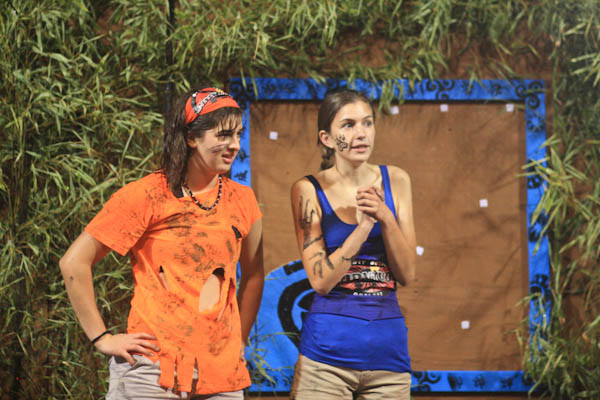 Halftime in football usually means bathroom breaks and getting food from the concession stands. However, it is different at the yearly homecoming game. The  floats and homecoming court keep the fans from leaving.

This year, the homecoming theme was centered around reality television shows. Seniors won the homecoming float competition with their Survivor themed float, dance and skit.

“I thought we had our float well thought out,” Claire Palmiter, senior class vice president, said.

The seniors had the boys in two teams walking up with the float carrying tiki torches. Then they split away and the girls’ dance would started. While the girls were dancing there were people completing the puzzles in the background, like a competition in the television show. On the float there was a fight scene, and the senior flag was raised on the truck bed. The rain added many difficulties to the seniors’ float so not everything went according to plan.

“The rain made everything go bad,” Palmiter said.

Their dance went well except a few stumbles. The puzzle pieces were supposed to be velcroed onto the float, but because of the rain they did not stick. Seniors had dry ice that would have produced a thick fog, however, the rain melted the ice. It was also difficult to light the tiki torches with wet wicks.

Juniors also had to deal with the rain. Their Dancing with the Stars float was really affected. Originally the juniors theme was going to be Jersey Shore. Then it changed to Toddlers and Tiaras before finally deciding on Dancing With The Stars. Much to their dismay they got third.

“I don’t mean to seem arrogant, but based off the crowd’s reaction, it seemed like we were the favorite,” junior class treasurer James Palmiter said.
Regardless, the sophomores’ Man vs. Wild themed float received second place, making the sophomores feel confident that they have the ability to make another great float next year, a float that will be a strong competitor for first.

Like the other classes their first choice was not what the float was at homecoming. At first the theme was just any television show, of any genre. The sophomores wanted to do Once Upon A Time. When the theme had been specified to reality television, their first thought was Cake Boss. After trying the dancers realized that making a routine for Cake Boss would be extremely challenging.

When sophomores finally started figured out that they were going to do Man vs. Wild, they began working on  the planning of the float, the dance the skit and making a background. Not only did student council have to make the dance and skit, but they had to teach it too.

“We worked really hard and had the experience from last year to know what needed to happen to push us into that second place position,” Olivia Loftin, sophomore class vice president, said.

Not varying from the expected, the freshmen got fourth place with their America’s Got Talent float. Part of the reason that freshmen usually get fourth is the fact that they have never done this before. Middle schools do not have a homecoming football game.

Inexperience was not the only problem the freshmen faced. During homecoming week, all the classes had signs up for their float’s theme. By the end of the week, the freshmen sign was broken into ten pieces, and the styrofoam sign still had to go on the float.

“Freshman are usually at the bottom of the other classes. I’m just glad we went out there and did it,” freshman class president Madisen Hallberg said.

The freshmen felt that they did good on the float. What the freshmen were really proud of was the skit at the assembly because they felt as if they had challenged all of the other classes.

Hallberg sang during the assembly, but because she was also on the homecoming court she was not on the float at the game.

With the fierce competition of the floats and skits, next year is looking to get even better.